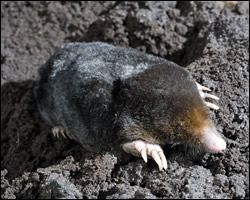 are small cylindrical mammals live underground. They will rarely come to the surface. The average length of a mole is about 7 inches. They have velvety fur; small ears and eyes, and short, powerful forelimbs with large paws oriented for digging. Their saliva contains a toxin that can paralyze its prey. The common mole is an insectivore, not a rodent. Their burrowing habits disfigure lawns, destroy flower beds, tear up the roots of grasses, and create havoc in small garden plots. Moles will leave volcano-shaped hills that are often made up of clods of soil

are a small rodent that looks close to a mouse, but with a more stout body, a slightly rounder head, and smaller ears and eyes. They are sometimes refered to as meadow mice
Voles are prolific breeders. They can produce more young than any of the rodent family. One female vole can have 80 offspring in a year! They love plants and fruits. They will also feed off of dead animals. Voles will eat root systems and burrow under plants or ground cover and eat until the plants are dead. They also love bulbs in the ground

are about the same size as a mouse or vole. They resemble mice except for their long pointy nose. A shrew is related to the mole family. They have sharp teeth. Shrews generally feed on seeds, insects, nuts, and worms. They are good climbers and burrowers. They have small eyes and in general the shrew has poor vision. They make up for this with a great sense of hearing and smell. Many species use echolocation to locate their prey. They have voracious appetites. A shrew can eat up to 90% of its body weight in a day.