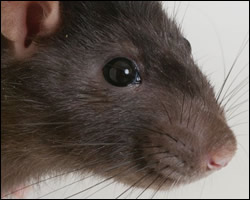 Rats are considered a deadly pest. They have strong teeth and can chew through glass, wire, aluminum and lead. They can enter a building by climbing, gnawing, jumping or squeezing through tight spaces. Rats will eat and contaminate foodstuffs and animal feed. They will often tear up insulation in walls and attics in order to build their nests. They can undermine foundations of buildings by burrowing and gnawing on building materials.

Once rats have gotten into your landscaping or garden it is only a matter of time before they will enter your home. Rats carry many diseases which can be transferred to humans.

The black or roof rat is very agile with sleek body. These rats are great climbers. They have grey to white colored belly and usually weigh between 5 to 10 ounces. Their tails are at least as long as their body and dark in color. Roof rats prefer fruits, nuts, berries, slugs, and snails. They prefer fruit, but they will eat an array of foods. In buildings, they are most likely found in attics, walls, false ceilings, and other enclosed spaces. The roof rat has a smaller range than the Norway rat and are partial to temperate climates They will often be found near the coasts. Roof Rats will often live near humans when there is food nearby. They can cause great damage to homes as they will chew through wires; which can cause fires

The brown rat has a large body with a grey belly. They can weigh between 7-18 ounces with a tail that is shorter than its body. The tail color is dark on top while the underside is pale. They have a rounded muzzle. Norway rats are partial to cereal grains, meats, fish, nuts, and some fruits but will eat an array of foods. Their nests are often along building foundations, below garbage or woodpiles, and in damp areas throughout gardens and fields.Norway rats are found in all 48 contiguous United States. The female usually has 4 to 6 litters and can have 20 or more young per year. Some of the factors affecting rat population is mild winters, weather related disasters and urban development

Although a wild animal, house mice mainly live near humans, causing damage to crops and stored food. They can vary in color from white to grey to light brown or black. They have short hair and a light belly. The ears and tail on house mice have little hair.

House mice have excellent hearing and vision. Their size allows them to enter homes with as little as ¼” opening. They are found in and around homes and commercial structures, as well as in open fields. House mice primarily feed on plants but are omnivorous and will feed on whatever is available. The urine of house mice has a strong odor. One female can have 5 to 10 litters per year, so the mice population can increase quickly.

House mice can transmit diseases, some of which are deadly. They can damage food and food packaging.

Deer mice have relatively larger eyes. They are often two-tone coloring. Deer mice are great jumpers and runners in comparison to house mice. Deer mice can plague farmers as they get into grain silos and storage bins They are carriers of diseases such as hantavirus, lyme disease, Ehrlichiosis and babesiosis are also carried by the deer mouse. They are prolific breeders and can pose serious health risks to both humans and animals